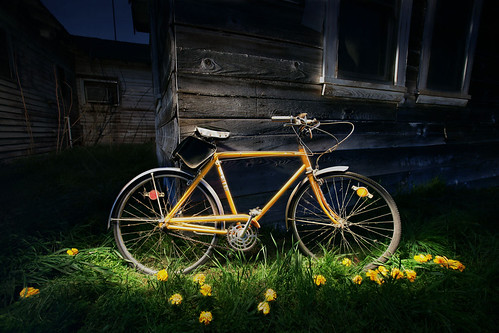 a How-To e Book is available at: www.AmericanPrideAndPassion.com

This photo from after the concert was shot in the Orphium Theatre in Los Angeles. My intention was to create a wonderfully beautiful photo of classical musicians and instruments on the stage, and have the scene appear as though the concert had just finished. I wanted to create something that is so pretty yet quiet. With an eye towards younger viewers, life is not all about Heavy Metal, video games and energy drinks…"http://www.AmericanPrideAndPassion.com" rel="nofollow">www.AmericanPrideAndPassion.com

One day while visiting my wife’s uncle up in the country, and while roaming about his property, I stumbled upon the backside of the old farmhouse, out towards the pastures a mostly un-traveled portion of the property where few venture. Back there where the grass is never cut, the numerous wild flowers were just gaining a toehold as spring had sprung, and the severely weathered siding of the old house all combined into a charming and seemingly unspoiled scene. To try and create this from scratch would be almost impossible. I realized immediately that this would be such a perfect location for a photograph. Maybe, an old bicycle leaning against the structure, quiet and serene.

Sharing further with Uncle Chet my enthusiasm for the location, his weathered house and the overall scene, it would be perfect for the specific shot I had in mind. I exclaimed before leaving, “Later on this evening when I return, don’t grab your shot gun, it’s only me!”

Interestingly, five hours later when I did return with an old bicycle and cameras in tow, ready for a relaxing evening session of outdoor location photography, things were not quite the same as how I remembered them a short time earlier.

Uncle Chet, in his enthusiasm to help out his new nephew and make everything as perfect as possible for that little art photograph I described to him earlier, had spent several hours cutting down all the tall grasses and wild flowers just behind the house. What a few hours ago had been a beautifully pristine and untouched area of vegetation, with all that it entails, has now transformed into somebody’s beautifully manicured backyard, not a tall blade of grass or flower in sight.

It’s true that sometimes the difference between a laugh and a cry is a razors edge of perspective or a few degrees of difference, – I did both simultaneously. For the next few hours Uncle Chet and I pulled, dug, cut and moved once again a dozen square yards of growth back into what looks pretty much like a wild overgrown and forgotten landscape.

People are often amazed at all the work that goes into creating what seems to be a simple photograph. This shot specifically proves, that, to be true.

The Capitol People (The Hunger Games)