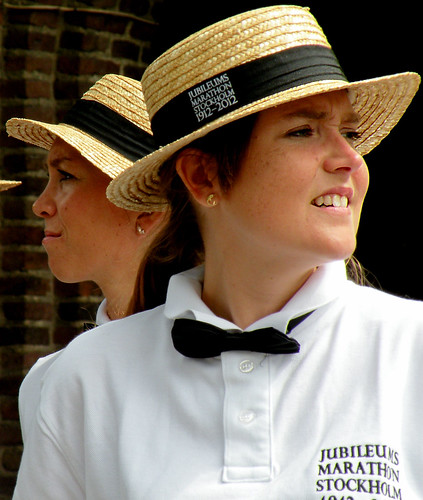 Women volunteers at the start of the Stockholm jubilee marathon race.
On Saturday July 14 2012 a jubilee marathon race was held in Stockholm in memory of the 1912 summer Olympic Games held in Stockholm. The 1912 marathon, which was carried out in the stifling heat, was a highpoint of the 5th Olympic Games. Stockholm Stadium, which was built for the Olympics, was full on on that day when 66 runners set out, 100 years later more than 10 000 runners had far better weather conditions when they completed the same course from Stockholm stadium to Sollentuna church and back.
The distance of the 2012 jubilee race was the same as as it was in 1912; 40,200 metres.
Runners who wished to run 42,195 metres – the stipulated distance for a marathon today – had the option of running an extra loop before crossing the finishing line.
Many participants were dressed in traditional clothes and the officials along the route had straw hats approximating the kind of dress used a century ago.

Things to Know about the Board Game Connect 4