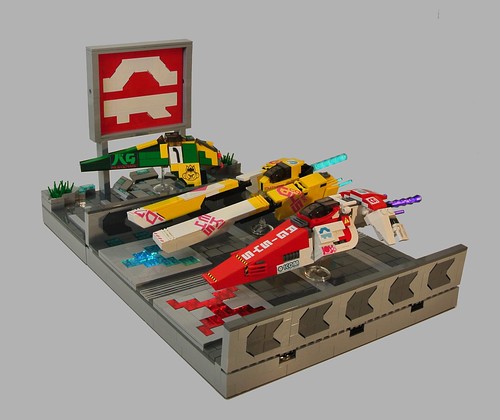 I’ve been getting back into one of my all time favourite games, Wipeout, and this is something I’ve thought about building for some time now.
I wanted to show the evolution of the racers from the oldest to the newest game, so I’ve made the AG systems racers from the first ever wipeout game (the one furthest back), because this was my favourite racer back in the day, and the one from Wipeout HD for PS3 (ok, technically the Fury variant from the expansion pack to HD is newer, but I went with the HD one).
And because I wanted it to have a competitor to race, I also made a Goteki 45 racer from the same game.

This will be on display at Brickworld this weekend 🙂

I will post individual pics of the racers later.