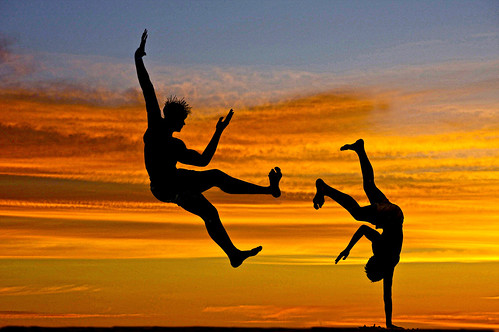 Capoeira is an Afro-Brazilian art form that ritualized movement from martial arts, games, and dance. Participants form a roda or circle and take turns either playing musical instruments (such as the Berimbau), singing, or ritually sparring in pairs in the center of the circle. The game is marked by fluid acrobatic play, feints, and extensive use of sweeps, kicks, and headbutts. Less frequently used techniques include elbow-strikes, slaps, punches, and body throws. Its origins and purpose are a matter of debate, with the spectrum of argument ranging from views of Capoeira as a uniquely Brazilian folk dance with improvised fighting movements to claims that it is a battle-ready fighting form directly descended from ancient African techniques.

For some time Capoeira was prohibited in Brazil. In 1890, Brazilian president Deodoro da Fonseca signed an act that prohibited the practice of Capoeira nationwide, with severe punishment for those caught. It was nevertheless practiced by the poorer population on public holidays, during work-free hours, and on other similar occasions. Riots, caused also by police interference, were common[citation needed].

In spite of the ban, Mestre Bimba (Manuel dos Reis Machado) created a new style, the "Capoeira Regional" (as opposed to the traditional "Capoeira Angola" of Mestre Pastinha). Mestre Bimba was finally successful in convincing the authorities of the cultural value of Capoeira, thus ending the official ban in the 1930s. Mestre Bimba founded the first capoeira school in 1932, the Academia-escola de Capoeira Regional, at the Engenho de Brotas in Salvador-Bahia. He was then considered "the father of modern capoeira". In 1937, he earned the state board of education certificate. In 1942, Mestre Bimba opened his second school at the Terreiro de Jesus – rua das Laranjeiras. The school is still open today and supervised by his pupil, known as "Vermelho

Descendant of African slaves in Brazil fighting styles and those who believe it is a uniquely Brazilian dance form distilled from various African and Brazilian influences. The best working theory is that it’s an African fighting style that was developed in Brazil. This theory is proven by a wise mestre named Salvano who once said "Capoeira cannot exist without black men".

Even the etymology of "Capoeira" is debated. The Portuguese word capão means "capon," or a castrated rooster, and could mean that the style appears similar to two roosters fighting. Kongo scholar K. Kia Bunseki Fu-Kiau also suggested "capoeira" could be derived from the Kikongo word kipura, which describes a rooster’s movements in a fight.[citation needed]Afro-Brazilian scholar Carlos Eugenio has suggested that the sport took its name from a large round basket called a "capa" commonly worn on the head by urban slaves.[citation needed] Others claim the term derives from the Tupi-Guarani words kaá (leaf, plant) and puéra (past aspect marker), meaning "formerly a forest." Or, given that "capoeira" in Portuguese means literally "chicken coop", it could simply be a derisive term used by slave owners to refer to the displays as chicken fights.

Some proponents believe that Capoeira was first created and developed by slaves brought to Brazil from Angola, the Congo, the Gulf of Guinea and the Gold Coast, who used it as a way to practice their martial arts moves while making it appear to be a game or dance. Since the slave-masters forbade any kind of martial art, it was cloaked in the guise of an innocent-looking recreational dance. Others believe that Capoeira was practiced and used to fend off attacks by Portuguese slavers in Palmares, Brazil’s most famous Quilombo maroon colony of escaped slaves.

There is no written historical evidence to support the notion that Capoeira is a battle-ready fighting form, and many other proponents see it as a folk dance form developed by African slaves from traditional African dances and rituals. While there is not much historical evidence about Capoeira in general, there is other information that supports this view. In his 1835 work "Voyage Pittoresque dans le Brésil" ("Picturesque Voyage to Brazil") ethnographic artist Johann Moritz Rugendas depicted "Capoeira or the Dance of War," lending historical credence to the idea that Capoeira originated as a dance, rather than a fighting form.

Capoeira is growing worldwide. There have been comparisons drawn between the Afro-North American art form of the blues and capoeira. Both were practiced and developed by African-American slaves, both retained distinctive African aesthetics and cultural qualities; both were shunned and looked-down upon by the larger Brazilian and North American societies within which they developed, and both fostered a deep sense of Afrocentric pride especially amongst poorer and darker-skinned Blacks. In the mid-1970s when masters of the art form — mestre capoeiristas, began to emigrate and teach capoeira in the United States, it was still primarily practiced among the poorest and blackest of Brazilians. With its immigration to the U.S., however, much of the stigma with which it was historically associated in Brazil was shed. Today there are many capoeira schools all over the world (capoeira is gaining ground in Japan) and throughout the United States, and with its growing popularity in the U.S. it has attracted a broad spectrum of multicultural, multiracial students. Capoeira has gained popularity among non-Brazilian and non-African practitioners for the fluidity of its movements.