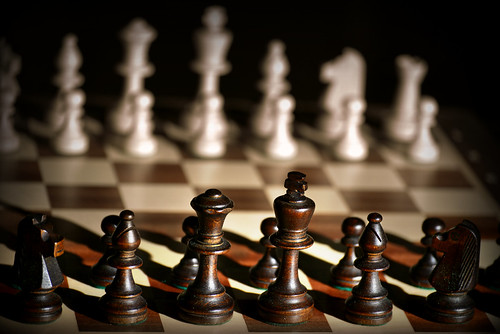 Have you ever wondered who invented chess?

I came across this story:

Hundreds and hundreds of years ago there was a King in India who loved to play games. But he got bored of the games that were present at the time and wanted a new game that was much more challenging. He commissioned a poor mathematician who lived in his kingdom to come up with a new game. After months of struggling with all kinds of ideas the mathematician came up with the game of Chaturanga. The game had two armies each led by a King who commanded the army to defeat the other by capturing the enemy King. It was played on a simple 8×8 square board. The King loved this game so much that he offered to give the poor mathematician anything he wished for. "I would like one grain of rice for the first square of the board, two grains for the second, four grains for the third and so on doubled for each of the 64 squares of the game board" said the mathematician. "Is that all?" asked the King, "Why don’t you ask for gold or silver coins instead of rice grains". "The rice should be sufficient for me." replied the mathematician. The King ordered his staff to lay down the grains of rice and soon learned that all the wealth in his kingdom would not be enough to buy the amount of rice needed on the 64th square. "You have provided me with such a great game and yet I cannot fulfill your simple wish. You are indeed a genius." said the King and offered to make the mathematician his most senior advisor instead.

The answers will amaze: